Invisible Seattle: The Novel of Seattle, by Seattle 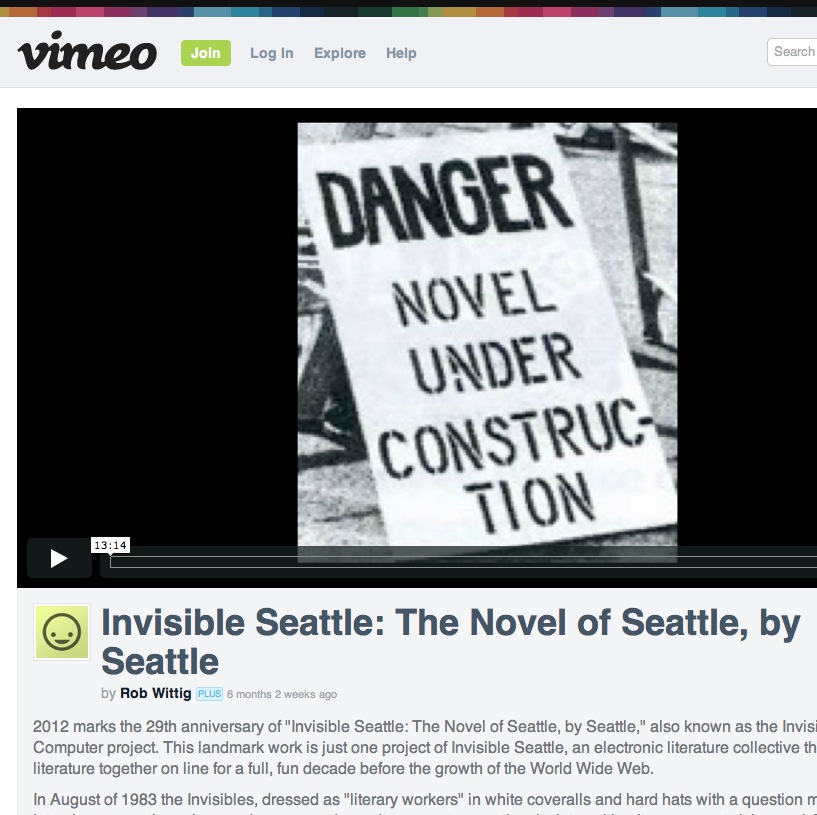 2012 marks the 29th anniversary of “Invisible Seattle: The Novel of Seattle, by Seattle,” also known as the Invisible Seattle Literary Computer project. This landmark work is just one project of Invisible Seattle, an electronic literature collective that wrote electronic literature together on line for a full, fun decade before the growth of the World Wide Web.
In August of 1983 the Invisibles, dressed as “literary workers” in white coveralls and hard hats with a question mark, used interviews, questionnaires, and repurposed arcade games to coax the city into writing its own great civic novel. The novel was publicly compiled during the Bumbershoot Arts Festival in a theatrical installation using the “cyberno-ziggurat” Scheherezade II: “first of a new generation of literary computers.” Seattle’s mayor threw out the ceremonial first word. Realizing that they had on their hands a “database novel,” the Invisibles remixed various versions and one version was published in book form.
Within weeks the group founded the electronic system IN.S.OMNIA (Invisible Seattle’s Omnia) as an electronic magazine designed, in the words of James Joyce, “for the ideal reader with the ideal case of insomnia.” IN.S.OMNIA was to be, as they wrote at the time: “Part literary database, part online literary magazine, and part free-form writing laboratory or ‘public diary,’ ” Successes of the 1983-1993 run included collaborations with members of the French literary group Oulipo, Fulbright work with Jacques Derrida, and numerous innovative projects that inspired electronic literature of the ’90s and ’00s.