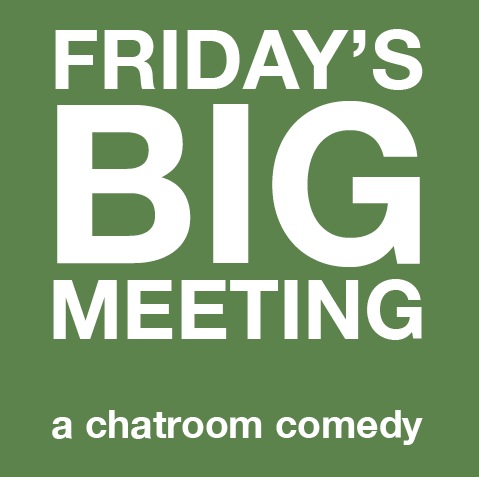 Friday’s Big Meeting purports to be the record of the proprietary chatroom of a small, struggling web design company during a single, tumultuous, do-or-die week. If they don’t please their sole client by Friday, they will go out of business. You, the reader, get to see not only the public exchanges between the employees, but the private communications as well—including a steamy, secret romance between Paul (in the the St. Louis office) and Anna (in the Chicago office). Paul and Anna’s first in-person meeting is scheduled f

or early in the morning on the same fateful Friday.

I was very influenced by Scott McCloud’s brilliant Understanding Comics as I composed this piece. I used a simple vocabulary of photos of my models (friends) showing facial expressions and gestures combined with a written format modeled on the look of movie scripts to try to answer the literary-critical hand-wringing of the era (ca. 2000) about “how hard it is to read on the web.” I still like the look of this piece. It moves along visually/verbally at a fast clip (I guess I always love the basic joke of making writing mimic conversation.) And it still cracks me up to the see the characters in costume on Friday morning.

This piece also anticipates netprov since I  “published” it “live” by releasing the episodes one-by-one over five days. I knew that, as a reader, I would love to read it episodically in real time. It got me thinking about truly real time projects.