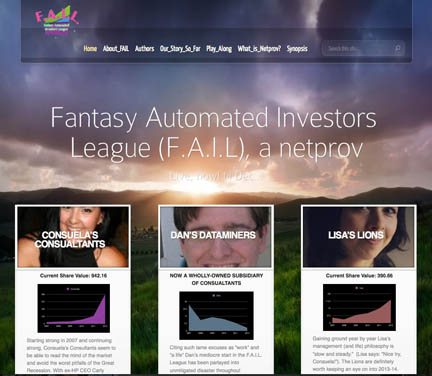 It was a story acted out in Twitter about three fictional characters and their adventures during those 5 days. The project was timed in conjunction with the Twitter Fiction Festival.

Complete text archive of all the Tweets in the F.A.I.L. netprov

The Story
Dan, Lisa and Consuela are busy, single salesfolk who keep their college friendship alive by Tweeting about their Fantasy League.  Except rather than playing Fantasy Sports, they are die-hard members of the Fantasy Automated Investors League (F.A.I.L.) in which they wheel, deal, joke and trashtalk about Fantasy Businesses the way others do about Fantasy Football teams. As they banter in Twitter, we learn that (in real life) Consuela is being promoted to stardom, Lisa dreams of marriage and kids (perhaps with Dan), and Dan’s career is in the toilet.

This week, however, all of that is about to change as the three friends head for the financial cliff of friendship!

First, Consuela attempts a sudden merger of her powerful fantasy company with depressed Dan’s failing one — a merger with decidedly romantic overtones — sending lively Lisa into a jealous tailspin. Consuela’s move violates not only the unspoken rules of the game but also the delicate balance of their relationships.

Second, they discover that these are not merely fantasy businesses.  Disgruntled employees begin to surface in Twitter, furious at Dan about the merger and its resultant layoffs and plant closings. It turns out the three have unwittingly become ensnared in a Wall Street scheme that creates real corporations and hires real employees managed remotely with digital aloofness by unsuspecting armchair CEOs. The two plots weave toward a wild double dénouement. What matters more, the friendships or the workers? Does love triumph? Who gets final bragging rights? Stay glued to your twitter feeds and find out!

Play along! Astonish us!?
Welcome to the Fantasy Automated Investors League (#fail12), a netprov in conjunction with the 2012 Twitter Fiction Festival (#twitterfiction).

We invite you to join in the writing and play a special role in the story.

So far. . .?
Since Wednesday (11.28.12) old business-school buddies Consuela (@Consualtants), Dan (@Dans_dataminers) and Lisa (@Lisas_lions) have been dealing with a crisis in their ongoing, 5-year fantasy league. Not a fantasy football league, but a fantasy business league, where they combine their hand-picked, dream management team with a dream portfolio to try to out-earn the competition, trashtalking each other all the way.

Wednesday
First, Consuela and her Consualtants made a shocking bid to buy out Dan’s Dataminers. Dan was embarrassed at his team’s poor performance. Lisa worried that this would mean the end of the friendly game.

Thursday?
Then it turned out that Consuela had designs not only on Dan’s company, but on Dan himself, as a romantic partner and the father of her children. Lisa objected and confessed that she has been in love with Dan for years. At the end of the evening, Dan said he needs until Sunday to make any decision on Consuela’s offer(s).

THIS IS WHERE YOU COME IN
Starting Friday (11.30.12) a new wrinkle emerges as it becomes clear that the companies everyone thought were virtual are actual real-life companies with actual real-life employees! Connie, Lisa and Dan are stunned! They thought it was just a game! And the employees are hopping mad.

Your mission is to play one of those employees.

STEP ONE
Choose an identity. You can play from your own Twitter account, or set up a new one especially for this netprov.

STEP TWO
Choose which company you work for: The rich and successful Consualtants, the steadily-growing Lisa’s Lions, or the disastrously struggling Dan’s Dataminers.

STEP THREE
Put yourself in the employee’s shoes.

STEP FOUR
Use Twitter to take action. Always include the #fail12 hashtag.

You have found out who your company’s owners are, and that you’re part of somebody’s game. How do you feel about that? You can share the information and your feelings with other employees.

Now what do you do? You can: