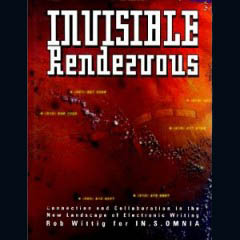 Invisible Rendezvous: Connection and Collaboration in the New Landscape of Electronic Writing

Invisible Rendezvous is both a history and a manifesto. On behalf of a legion of unseen “authors,” Rob Wittig describes the evolution of IN.S.OMNIA, an electronic bulletin board that first linked Seattle computer users in 1983 and soon spread into a nationwide network of invisible but creative collaborators. Wittig calls IN.S.OMNIA “an electronic town square” whose participants view it as a “digital coffee house, a place of refuge where they can be their various selves.” In this non-place, the faceless in.s.omniacs engage in theoretical debate and shared authorship of treatises, dramas, novels, and hybrid genres that have yet to be named.

This flurry of keyboard-clicking makes IN.S.OMNIA a point of entry into a kind of literary virtual reality that explodes traditional assumptions. Standard notions of linear movement in a text, of a work frozen at the moment of perfection, of the writer’s mission to discover and use a single authentic voice are called into question. Hypertextual interaction between the myriad in.s.omniacs and the polyphonic, collaborative texts they create represents a new model of publishing where, Wittig notes, “every reader is a writer, and new forms appear, a new writing that is at once literature, graffiti, conversation, and word games. By its structure, IN.S.OMNIA calls into question fundamental constructs of late Romantic literature: the Author, the Work, the Reader.”
While other books ponder the possibilities of postmodern literature and new technologies, Invisible Rendezvous reports on more than a decade of actual accomplishments in the field. It traces the lineages of the new writing and adds lively, intriguing fuel to the ongoing debate over thestatus and future of literary assumptions, creative activity, and popular culture in America.


A very important book that tropes virtually the entire discussion about the intersection of computers, the managed society, the myth of the population-as-victim, and contemporary theory. Remarkably, it does so for both a theoretically literate and a ‘general’ audience. Wittig is both brilliant and crystal clear about what happens when the avant-garde gets computerized. Writers, readers, and ‘literature’ are already no longer the same. —Robert Siegle, Virginia Polytechnic Institute
Invisible Rendezvous is a breath of fresh air based on practical experience with the electronic medium which intertwines the practical and the theoretical in simple and direct discourse. –Sidney Levy, University of California, Santa Barbara

Warning: count(): Parameter must be an array or an object that implements Countable in /home/robwit5/public_html/wp-includes/class-wp-comment-query.php on line 399