“Like so many others, you and your online personality need the turbo-boost only Grace, Wit & Charm™ can provide.”

Grace, Wit & Charm was first performed over the span of two weeks, May 14-29, 2012 in Twitter, on the web, and two nights live at Teatro Zuccone, webstreamed live.

Grace, Wit & Charm is a behind-the-scenes workplace comedy about a company that offers three services to heavy online users: “Grace” helps your avatar move more naturalistically by using live motion capture, “Wit” ghostwrites jokes for your status updates, texts and chats if you have no sense of humor, and “Charm” is for the romantically impaired, helping you flirt and conduct online romances. 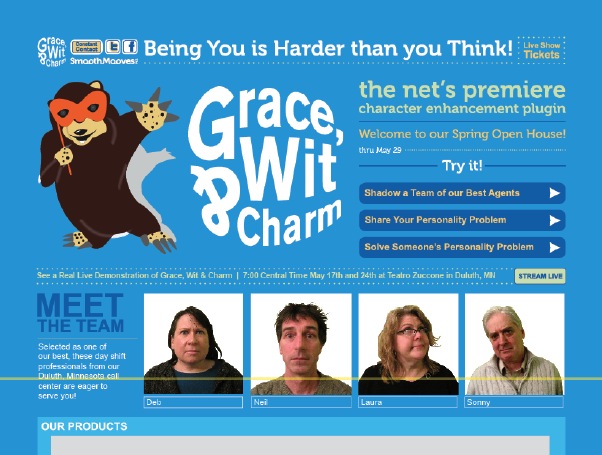 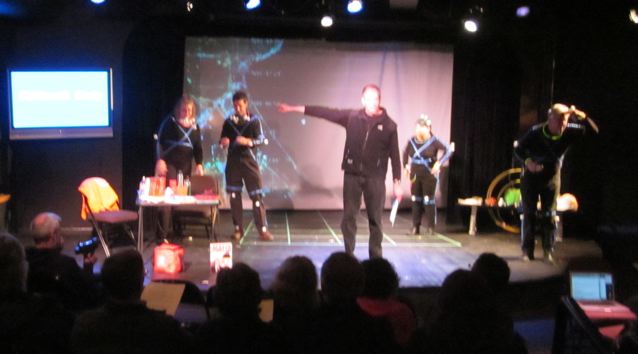 Synopsis of Grace, Wit & Charm
What readers found on the fictional company website, on Twitter, and in the theater, was the hardworking day shift team of the Duluth, Minnesota Grace, Wit & Charm call center: Sonny, Laura, Deb and Neil, and their slave driver boss Bob. The team had been working 12 hours a day, seven days a week since November (the company’s reaction to the bad economy) and was totally surprised to be suddenly identified as the Open House Team, and to have all their Tweets and blog posts be made public. At the call center, when Wit (humor) and Charm (romance) problems came in, the team members wrote solutions on their smart phones and wisecracked about each other’s work. When Grace (avatar motion) problems came in, the team members, always clad in motion-capture suits, leapt into the motion capture grid to pantomime their solutions. And the whole time Bob the Manager is urging them to more productivity as the team competed with their hated rival team in Shreveport for the prize of the Team Vacation. 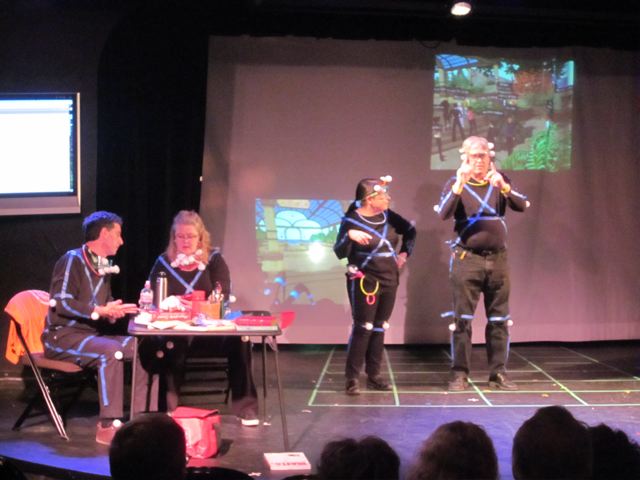 The Grace, Wit & Charm team was professional. But the team was tired, the team was grumpy, and the team (like so many employees) had to live its personal life at work. Between solving customer problems, the close-knit group helped Laura manage her love life, helped Deb deal with her houseful of kids, helped Neil accept the fact that his military contractor wife in Afghanistan had been cheating on him, and helped Sonny prepare for the Grand Nationals of his beloved sport: remote control model snowmobile racing. Three-day sub-plots featuring different characters overlapped and interwove. The two live shows were designed to showcase crucial moments of multiple subplots. The first live show established Laura and Sonny as a power duo for solving romantic problems. After struggling with her on-again, off-again boyfriend the whole show, Laura decided to become a GRACE, WIT & CHARM customer and officially request Sonny’s help in wooing the boyfriend. Sonny was torn between his personal scorn for the boyfriend and his professional pride. 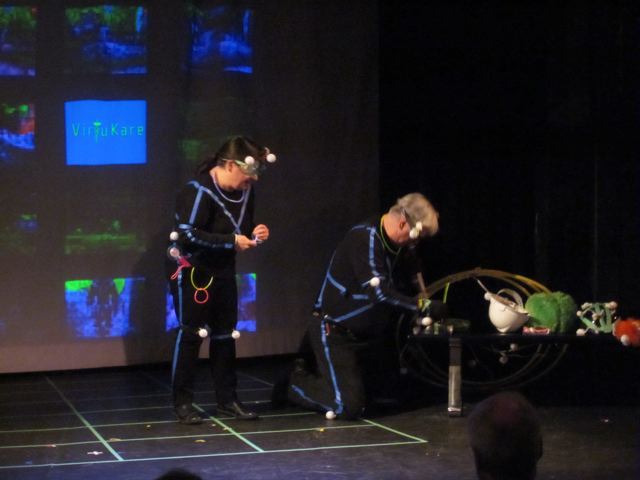 By the second live show the team was doing more and more of the new, health-care based work, virtually tending to shut-ins and performing small, online medical procedures. Only Sonny seemed to have some qualms about doing the medical work without any training. By contrast, in her Tweets during the week Deb had shown herself to be more than enthusiastic, finally seeing a chance to live out her frustrated dream of being a physician. Well, a veterinarian. During the second show, Deb was scheduled for her first real online surgery—a carpal tunnel job. Neil, who had been suffering from carpal tunnel woes for days, asked Laura to imitate Deb’s motions and perform the surgery on him for real. This was his only option, since the company wasn’t providing health care. The final tableaux of the double surgery—one virtual on the motion capture grid and one live on stage, ended the performance. 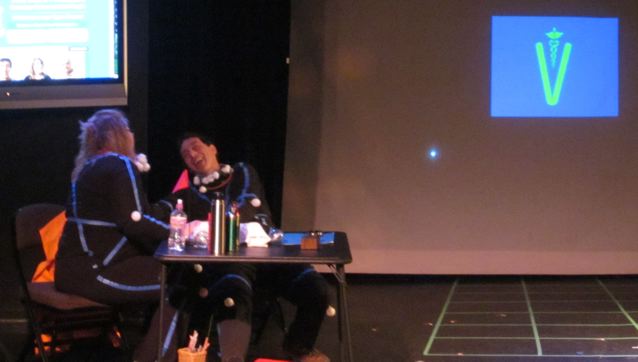 The final days of the project saw the realization of the romance between Neil and Laura and their elopement into a virtual world in which Laura had long been a high priestess, and the rescue of one of Deb’s kids from video game addiction. The new flood of medical assignments started to include more end-of-life, hospice care, at which Sonny showed his subtle skill. Our Duluth team wound up losing the contest for the Team Vacation by a hair to Shreveport, but Bob relented and arranges for them all to join Neil and Laura in a virtual holiday.
The last words of the project were as Sonny and the team said goodbye to a dying client/patient and goodbye to the readers.